Storing potatoes for long term use is very important. When potatoes go on sale, I like to buy a big bag and use it as needed but many times the potatoes spoil. So I set out to try a new method to successfully store potatoes in my basement.

The method for storing potatoes that I tried was very similar to the one I use for storing my tomatoes over the winter. It involves using newspaper to wrap and cover the produce for long term storage. For the potatoes, I used a plastic laundry basket that I had on hand and newspaper. The step I used are as follows:

First, cover the bottom of the laundry basket with a double sheet of newspaper as shown. 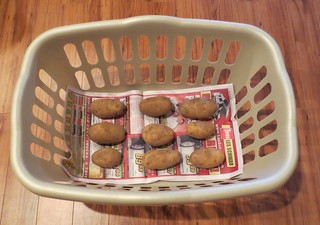 Next, put the potatoes on the newspaper and leave room between them for air flow and so they are not touching each other. 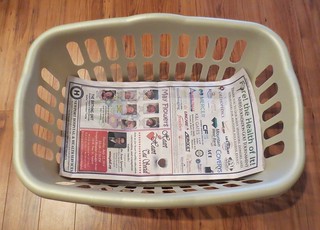 Next cover them with another double layer of newspaper. 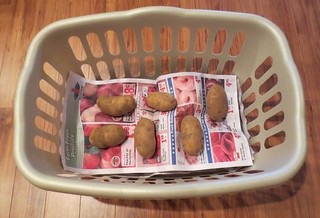 Repeat the process until you have all the potatoes covered that you are storing. 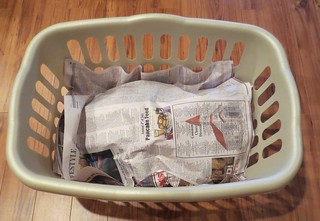 Finally put one final layer of newspapers over the top of the last layer of potatoes. I used extra and folded down the newspaper and tucked it in around the sides of the basket.

I then stored my laundry basket with the potatoes in my basement store room. Wherever you end up putting the potatoes, make sure its dry, cool, and dark as this has been proven to help the long term storage of potatoes.

Conclusion:
After 4 weeks — All the potatoes are doing well and I’ve use a few of them and so far they are storing nicely.

I hope you try this useful tip for long term storage of your potatoes. It is a great way to save money and preserve your potatoes for future use.